After having passed a strict selection by the Agenzia Spaziale Italiana (Italian Space Agency), in 1992 Maurizio Cheli joined the European Space Agency (ESA) and was sent to the NASA Johnson Space Center in Houston where he would train as Mission Specialist, that is professional astronaut. Before then, Italians who had flown to space, did so as Payload Specialists, that is, specialists of useful load. Therefore, their participation to the mission was tied exclusively to their specific scientific skills of one of the on-board experiments.

After years of training, in 1996 he attended the Space Shuttle Columbia STS-75 Tethered Satellite mission, first Italian to assume the role of Mission Specialist.

“The night between July 20 and 21, 1969, when I was 10, I waited for the greatest exploit in Aviation history like millions of people all over the world. On a black and white TV screen, I was able to recognize the shape of a spacesuit going down the steps of a space vehicle to set foot on the Moon. Impossible became possible. I went outside and looked at the Moon. On that night, I started to think that that far-away thing would not have been something mysterious and unknown any longer.

I was absolutely fascinated by what I had seen. There were no doubts: as an adult, I would be an astronaut.” 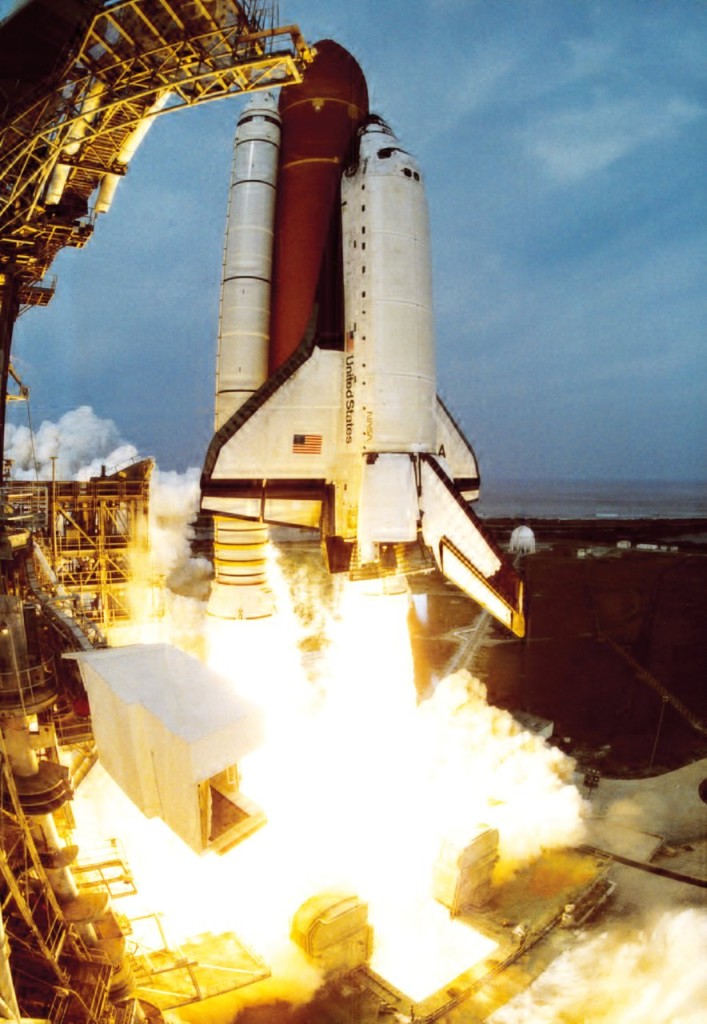 The take-off of Columbia Space Shuttle

The day of the launch

"The suit is hot, despite the internal liquid cooling system. The parachute is not a comfortable cushion at all, but in this moment there is no other place where I would rather be. The countdown keeps on regularly and at T-2 minutes the astronauts close their helmet visors. Suddenly the sounds diminish, and they can hear the breath of their mates becoming more intense. Maurizio briefly repeats the most critical procedures that can occur immediately after the launch, his tasks and those in case of emergency. This time things get serious. At T-6 seconds, at Main Engine Sequence Start, the ignition sequence of the main engines begins. Countdown reaches T-0. Maurizio can feel the vibrations of the structure increasing considerably, and almost simultaneously he sees the first launching pad slowly slipping out at the side of the window pane on his left. He is leaving Earth."

Excellent professionals composed the crew of the Columbia STS-75.

Andy, the captain, was at his third flight. He was a test pilot coming from the Marine Corps, with a direct and very easy-going attitude.

Scott would have been our pilot. He was a test pilot of USAF, the US Military Aviation, as well.

Franklin was an astrophysicist born in Costa Rica, with a very interesting scientific career. He would be the Payload Commander on board - responsible of the scientific load of the mission. This was his fifth mission.

Jeff was an astrophysicist, at his fifth mission as well. He was naturally attracted by cultural aspects, and his passion for arts had led him to speak a discreet Italian.

Umberto was in charge of the Payload Specialist role - useful load specialist. He also was an astrophysicist, he had been working since the beginning to the experiments of the satellite that we were transporting in the hold.

Claude was an astrophysicist coming from Switzerland, he was an ESA astronaut too, and had already flown once to the space.

Maurizio was designed to be Mission Specialist 2 (MS2), that is the shuttle flight engineer. For this task, he would have been sitting in the cockpit, between the captain and the pilot and would have supported them in managing the vehicle during the dynamic phases of the flight, launch and return. While in orbit, he would have been in charge of the management of the Shuttle systems with Scott. Moreover, he was in charge of two combustion experiments on board, inside the cabin.

The experiment led by the STS-75

The Tethered Satellite System (TSS) represented the main payload of the mission. The orbital dynamic of the two linked bodies showed several differences compared to what had been seen during ground simulations.

The release of the satellite was a textbook one. Just some hundred meters away and the instruments on board recorded immediately a flux of electricity, as theory predicted. The plan was to reel out the satellite to a maximum distance of 21 Km.

At a distance of 10 km however, a sudden electric arc instantly burned the wire. The satellite separated from the Shuttle, and after some days burned while re-entering the atmosphere. After the flight, an accurate investigation showed that the electric arc was due to an imprecision of the mechanical manufacturing executed before the launch that had damaged the isolating cladding of the wire.

This experiment, as others conducted during space exploration activity, not only showed the necessity to systematically prove theories or technical solutions, but also how space is a special environment for test and experimentation.

We go on the verge of knowledge to always discover something new.